This egg carton craft is a creative project that my son is the inventor of when he was a middle schooler. This craft is fondly known as Paco the Parachutist in our family.
I remember a lot of time and effort on his part creating and perfecting this parachutist.

Proud of his design, he showed it to friends and like wise they copied the idea. His craft spawned parachute contests and it was fun seeing the group grow and the creativity expressed in so many different ways. The parachutist that landed last was the winner.

Learning how to modify their egg carton craft for their competition made this not only a craft but also an educational one as well. So not only was this a fun craft, it also was a craft teaching problem solving skills and the development of an invention.
*The first proto type with pipe cleaner arms and legs. Modifying it without the pipe cleaners made it lighter to increase its chances of winning!

Cut two of the bottom humps from an egg carton.

Leave about 8 inches of thread between the egg carton and the parachute. Do that for each corner of the trash bag square.

Put a drop of glue over the string and pin so it will not unravel. The safety pin is now inside the first egg carton hump holding the thread.

Take the second hump and glue it to the top.

Decorate according to your imagination. Add facial features.
The egg person now is ready to be tossed into the air and the parachute will float him to the ground.

This can be a fun family craft and each family member can create their own.
Create your own rules for your competitions. 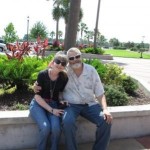 by Grace Hodgin September 12, 2018
Grace Hodgin has been inspiring children to be crafty for over 40+ years. She is a free lance writer and fiber arts expert residing on the edge of the Ocala National Forest. Grace shares her DIY projects and vegan recipes on her site at blessedelements when not sharing her crafty ideas for RuralMom readers.
What if your whole life was based on LIES? (Giveaway!) Crazy-Good Deals at GameStop PRO DAYS Sale Sept. 15!

CREATE Home DIY
05
Shabby Chic: How To Give a House Personality
by Barb Webb
CONTINUE READING